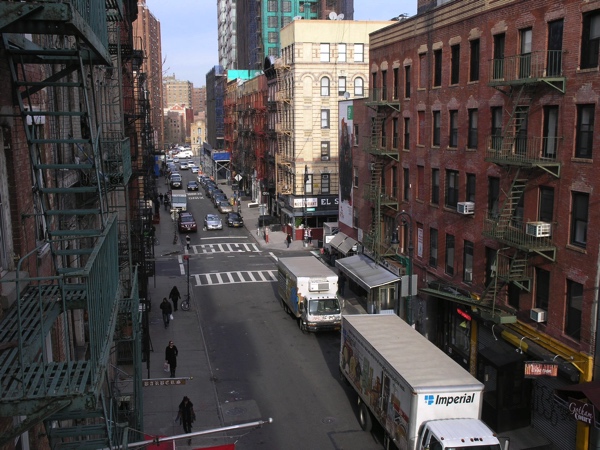 Postmasters Gallery is pleased to announce Ludlow Street, the fifth exhibition of Wolfgang Staehle with the gallery since 2001. Staehle is best known for his fixed-position recordings (or live transmissions) of locations around the globe, depictions which challenge our understanding of place and time. Phase shifting between landscape photography and panoptic surveillance, Staehle's works collapse the comfortable distinctions of machine and human perceptions of time.

Staehle produces his works in real time using chrono-photography, capturing a new picture every few seconds. For Ludlow Street Staehle will present ten works recorded between 2005 and 2016. Each work comprises a 24-hour cycle of an identical view of the street, ten days over eleven years, selected by chance operations. These temporal objects capture the minute changes and fleeting movements of life as it happens in front of the camera, while also extending the view of the urban landscape across the longue durée, the otherwise unaccounted changes wrought over a decade.


As with the Date Paintings of the late On Kawara, Staehle's archived days become histories of the interval of their creation, even as they are inexorably supplanted. These 24-hour windows into the mundane or profound existence before the unmoving camera freeze and retain time, what philosopher Bernard Stiegler* characterizes as "primary retention," a lost present. "Second retention," or memory, is the weaving together of these memorialized moments. Staehle's technologically enabled practice embodies the next phase in Stiegler's model, "tertiary retention," the exteriorization and spatialization of thought and memory itself. In our pervasively digitized reality, Staehle materializes the creation of our fractal, communal culture, an endless datastream of ordinary life continuing on, never static, never quite repeating, never quite the same.

Click here to see a sample from one of the pieces.

Concurrent with his Postmasters' exhibition Wolfgang Staehle is a part The Poetics of Place: Contemporary Photographs from The Met Collection opening December 13 at The Metropolitan Museum of Art.