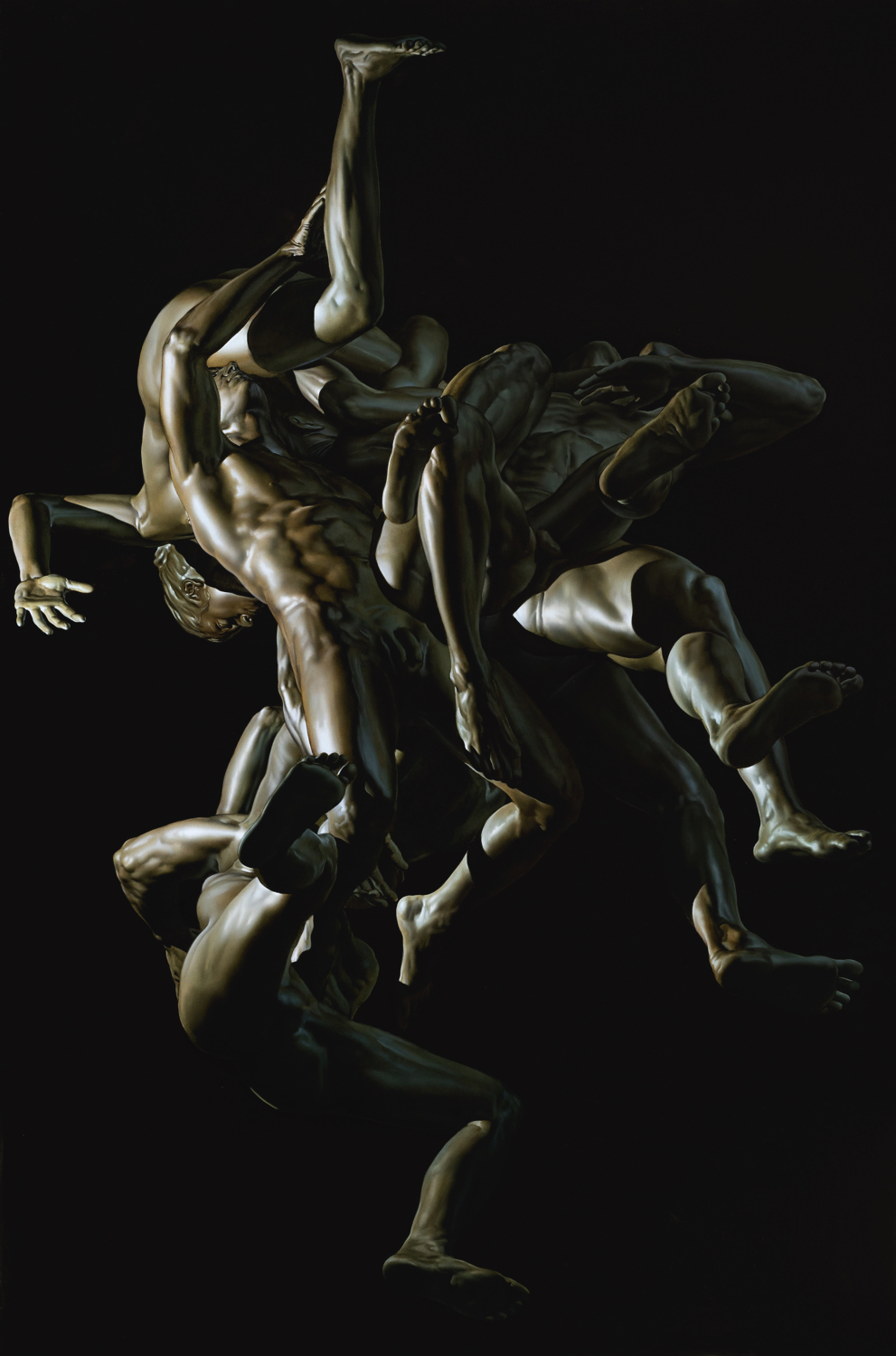 Postmasters is pleased to present The Merging: beyond the end, Nicola Verlato's (b. Verona, Italy, 1965) first solo exhibition with the gallery. The show stems from the supposition that we have entered a new phase of image-creation due to the massive developments in new digital media, where our relationship with reality itself has been affected. The concept that space is not given but is defined by the accumulation and progressive organization of geometrically constructed objects guides Nicola Verlato's painting process. This exhibition is a manifesto of his vision and of the philosophical implication of the huge shift in image-creation that we are witnessing for the last 50 years.

What is the place of art in all this? And even more - that of painting?

Nicola Verlato started experimenting with 3D modeling as early as 1991, and, in preparation for his painting, continues to work with tools such as Z-Brush or Maya 3D gaming software. Influenced by some of his early 80s encounters with computer generated sequences in movies such as Tron, Verlato firmly believes that in order to go into the realm of modern painting, it is crucial to adopt the most advanced technologies that deal with polygonal modeling. For the artist this extreme geometrization is the new material through which the world can be not only represented, but infinitely duplicated, a material that turns each image into a source of countless visual re-interpretations.

Verlato's painting process is to 3D scan humans, import the data into a software tool, digitally sculpt the figures, manipulate the images, extract his visions, and finally paint his works by hand, building on the long tradition of classical painting techniques. The painting becomes a membrane between the reality of our body and the world beyond its surface.

Painting in the twentieth century reached its non-representational endgame with Malevich's Black Square. And although we no longer look for the light ghosts of photography and cinema in the absolute darkness of the square, we can discover the vectors of a new polygonal geometry.

As the exhibition oscillates between nothingness and everything-ness, on one side of the gallery is a black square painting concealing a Mazzocchio - a geometrical shape derived from the Renaissance drawings of the artists and mathematicians Paolo Uccello and Piero Della Francesca. This is anod to the main protagonists of the Italian Renaissance, who focused in their studies first on the idea of perspective, and consequently on the idea of representing the world through progressively more complex geometric shapes.

On the other side of the gallery hangs a 20-foot painting The Merging, uniting the worlds of art and science. In this work we can see the Mazzocchio on the top drawing in human figures seemingly reawakened from a dream of 500 years. On the left of the canvas is a depiction of Werner Heisenberg, the pioneer of quantum mechanics and the author of the uncertainty principle; while on the right - a vision of Jackson Pollock dripping his paint on a canvas with the finished painting Autumn Rhythm (number 30) behind him.

The viewers are able to explore the 3D interior of The Merging with a custom app available for use at the gallery.

The single 3D printed sculpture in the center of the gallery presents a similarly entangled amalgam of human bodies as it reverses the illusion/flatness of painting and returns it to a physical space.