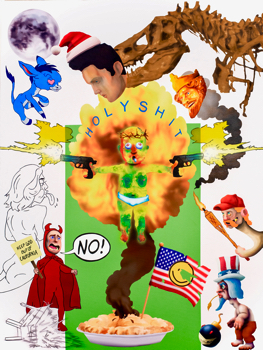 Postmasters presents an exhibition of new paintings by LA based artist Canyon Castator.
This will be his second solo exhibition with the gallery.

Ballad Of The Conspiracy Theorist


You learned it in school from the back of the class,
About what was dug up from the rubble and ash,
Bout the camps, the candles, the chambers, the flash,
So long ago in that great nation clash.
You get rid of the notion of 'unthinkable acts',
Of uncrossable lines, of unpassable cracks,
And you wonder 'if this kinda thing happened back in the past,
Are my people today any better than that?'
So you go out a looking, cause you've got a suspicion,
That there's a reason you're being fed all this patriotism,
They seem to gain power from your feeble position,
And the blinder you are, the stronger their system.
So you sit at your desk trying to confirm your beliefs,
But the windows you open only worsen your griefs,
Makes your skin crawl, makes you spit, grit yer teeth.
Yea man it's already too late for any kind of relief.
You see the cracks in the story your thoughts start a clearin',
The facts are in front of you and you're right to fear 'em,
There's voices in your head and your fighting to hear 'em,
He says he's on your side man, so you start to revere him.
He tells you, 'you're not the crazy one, you're not the loon,
It's everyone else who's on the wrong side of the spoon.'
'Cause JFK wasn't shot by some goon,
And there's no way in hell that we've been to the moon.
This whole fucking planet is flat, don't be a pretender,
The lies all play into their Masonic agenda.
And the Titanic, yea it wasn't an iceberg that sank her,
It was a plot to create the FED, thought up by some banker.
He lays it out clear man, so sweet and well tuned,
He has you dig deeper 'cause there's more "truth" to consume.
9/11 was a coup to leave us weak and marooned,
It makes sense, you have sources, you're not some buffoon!
You watch tears running down faces of played crisis actors,
And Toyota trucks filled up with paid ISIS contractors,
You can't trust no one no they're just the distractors,
They build the bombs, the poison, yea they're all benefactors.
You start giving gazes so sideways they wrap around corners,
You can't trust your countrymen you can't trust the foreigners.
Can't watch the news you can't stand the reporters,
You start digging through your couch in search of hidden recorders.
There's someone listening in, oh yea you can hear her,
You start looking for trap doors and tapping on mirrors.
Your search history's being watched by some anti conspirer,
But they can't deter you, you've never seen clearer.
But your skin's getting pale kid, you can't stand your appearance,
Your teeth turning yellow, getting weird looks from your parents.
You try to tell 'em but they don't want to hear this,
No, they turn around and call you a 'conspiracy theorist'
. Yep, you're losing your shit man, long time coming albeit,
And you're left with one option the way that I see it.
You gotta take all this shit, wrap it up and just leave it,
Cause you've got a sickness, and alone you can't treat it.
You keep that tinfoil on your head, then you'll just keep a sinking,
But this book here will help you forget that 'truth' you're seeking,
A little wine will taste better than that kool-aide you're drinking,
Oh yeah we've got something that will free you from thinking.
So welcome to normalcy, come join, take communion,
We're doing God's work, yea business is boomin',
It's not what you're thinking, so stop all your gloomin',
We believe in crazy shit too. Salvation is loomin'.