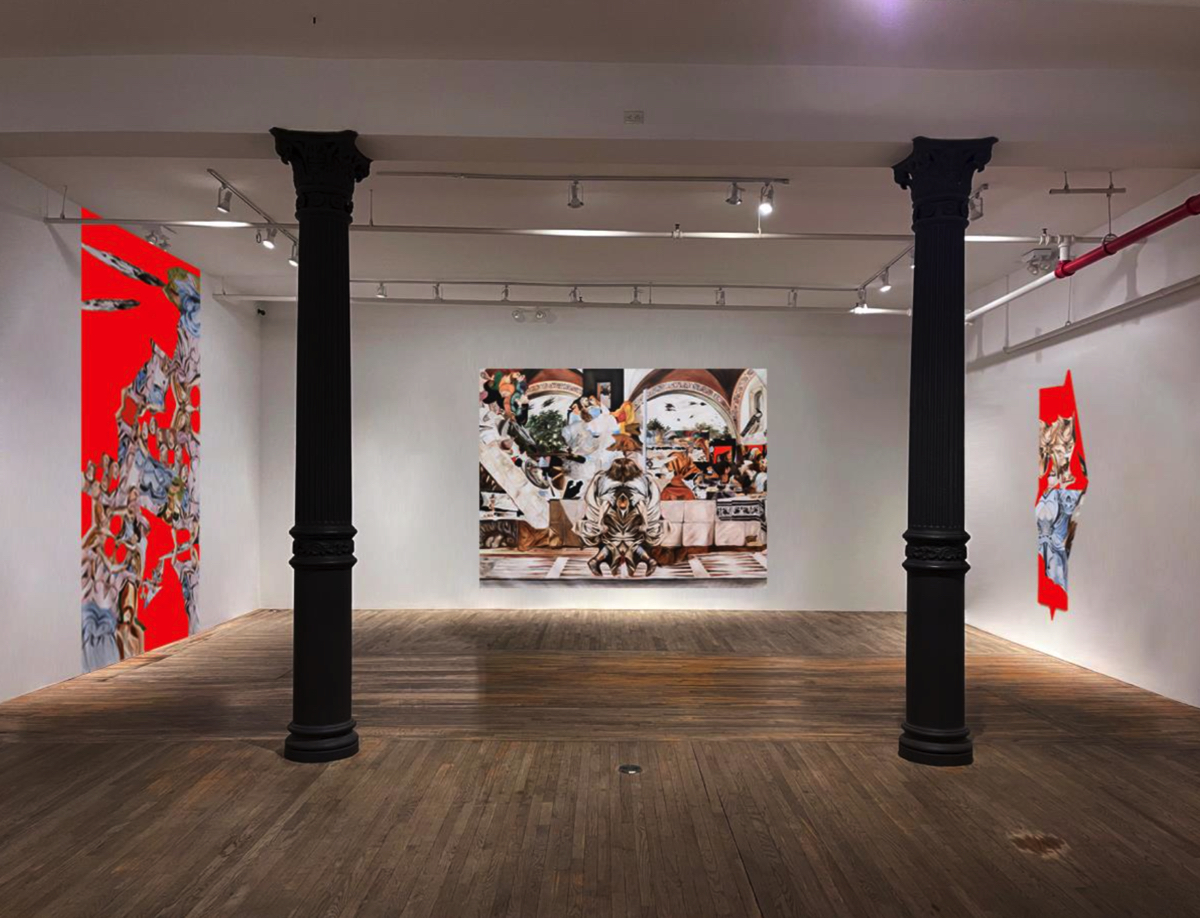 Titled Due to the Image, the exhibition consists of the first series of paintings made by Alessandro Giannì in collaboration with his custom-made artificial intelligence program named Vasari (after Giorgio Vasari, 1511-1574).

Alessandro Giannì merges the analog nature of painting with new media, AI, Internet and digital culture in order to explore the connections between the digital universe, new artificial realities, and the dreamlike and introspective world of human beings, past and present. He collects various aesthetic fragments and historical symbols from the web, culture and social networks and twists them into a new kaleidoscopic, digitized and abstracted visual language of his own, while holding on to the most classic form of art, the Painting.

Vasari was born from Alessandro Giannì's need to find an alternative to human logic to conceive his works. The AI has been programmed to emulate the compositional processes of Giannì, by tracing the artist's body of work and his extensive digital visual archive.

The creation starts with several inputs, such as keywords provided by the artist that Vasari uses to search the web for images, or a selection of images that are uploaded into the software and then reworked. The software can process an unlimited number of images that will remain in the archive and are stored in a non-relational database, using a deep learning model called convolution neural network (CNN).

In addition to the archive and given keywords by the artist, Giannì provides the AI with crucial input for sketch composition, such as image size, colour preferences, quantity of images to combine, and a variety of other possibilities. Giannì also intervenes manually and feeds the resulting image to the AI, which modifies it again based on further inputs. In this way, two realities are contrasted: the programmed, endlessly repeating binary e-matrix, and the human one made of defects, errors and weaknesses. The exhibition layout was also conceived by uploading the exhibition's images into Vasari's database, which then came up with potential solutions for installation.

Each painting in the exhibition corresponds to a digital NFT processed by the software, and is available through PostmastersBLOCKCHAIN.

The software was developed in 2020 by Unboolean, a creative studio that moves on the border between art and engineering.

The exhibition will be accompanied by a limited edition publication with texts by the philosopher Giuseppe Armogida and the curator and critic Renato Miracco, designed by Silvio Saccà, supported by Italian Cultural Institute of New York.