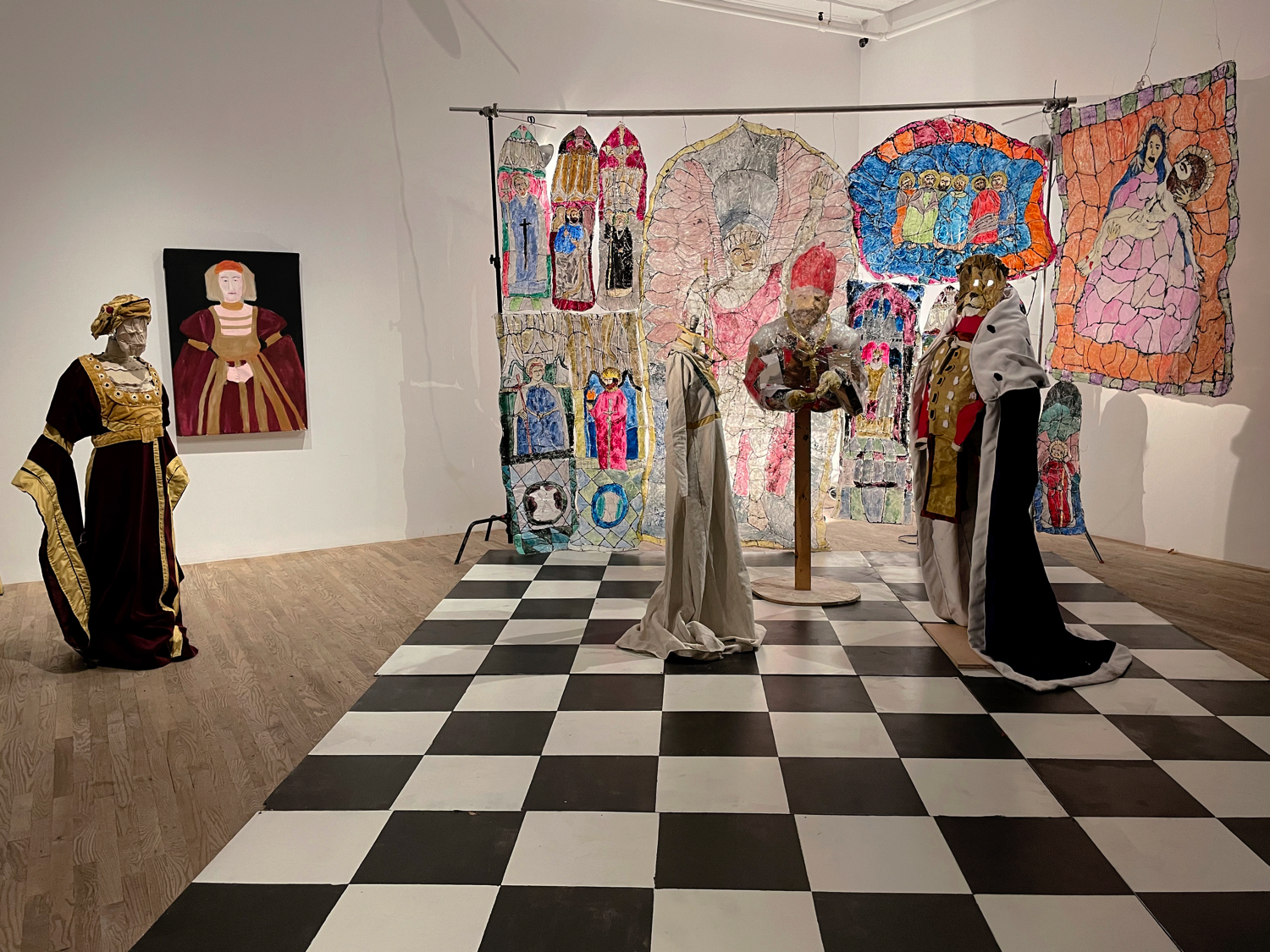 Postmasters is proud to announce Cate Giordano's solo exhibition REX, marking the artist's first show with Postmasters Gallery. REX is a multimedia installation loosely based on Henry VIII of England and his arranged marriage to Anne of Cleves (wife #4). The politically astute union is strongly encouraged by Henry's lead advisor, Thomas Cromwell, in order to secure an alliance with German Duke of Cleves after Henry's infamous split from the Catholic Church. Having never met Anne, Henry commissions a portrait of her from Hans Holbein, and based on Holbein's rendering, he agrees to the marriage. When Anne arrives, Henry rages that she looks nothing like the portrait and that he is not attracted to her, but ultimately presses forward with the marriage to secure an international alliance and produce much needed male heirs to inherit his throne. Throughout, he is haunted by his past violent deeds, uncontrollably childish impulses, and his insatiable desire for total control.

Combining video, mixed-media sculpture, and performance, REX delves into the psychology and self-justifications of a tyrant. The piece reflects on the past to talk about the present, using Henry VIII as a launching point to explore the nature of autocratic and patriarchal power and its systemic impacts interpersonally and on the world. The videos were shot both on mini DV and through zoom calls with actors in Los Angeles and Karlsruhe, Germany. Giordano performs as both Henry and Anne of Cleves. The piece also features Julianna Schley as Thomas Cromwell and Johanna Wagner as Hans Holbein as well as musical recordings by Jordi Wheeler.

Cate Giordano is a filmmaker, sculptor, and performer. Their work has exhibited at Microscope Gallery, Spectacle Theater, Anthology Film Archives, Millennium Film Workshop, Spring Break Art Show, and others. In 2018, their installation "After the fire is gone" was acquired by the Margulies Collection at the Warehouse. Writing about their work has been published in The Believer, BOMB Magazine, Hyperallergic, San Francisco Art Quarterly, and Artnet. They received a BFA from Massachusetts College of Art in 2008 and were a Smack Mellon Artist Studio Program recipient in 2016-2017 as well as a resident at Onassis AiR in Athens in 2019. Originally from Pensacola, Florida, Cate Giordano lives and works in Brooklyn, New York.